Yes, I know, I got so caught up in my office project part of the January Cure that I decided to drop the rest of the Cure projects and focus on the office while I was inspired. That room has been a major sticking point in my ability to move forward and for over two years I lacked the inspiration and will power to make real changes in there.

When I last blogged about the January Cure I had managed to clear everything but the furniture out. I had laid out a plan for the swap meet items and I have stuck to that plan. If an item hasn’t sold in 3 to 4 weekends, it goes to Goodwill or the local charity Thrift shop. I’ve made a lot of room in the garage this way and I’ve also created room on my swap meet table for crafts I’ve made myself.

The room isn’t ready for a final reveal yet (hey, it was a massive project), but my son and I finished the big build of the long craft/computer desk. Once I moved my computer to it’s new spot, in a tranquil room, with a view by a window instead of the dishes in the sink, I felt like writing. So, here is what we’ve been up to on the project.

Yes, we have a ladder. Apparently it is only useful for holding up the paint bucket, according to John who wanted to be practicing his stilt walking.

My phone camera does not like to get a good picture of the wall color. It is dark, but it is most definitely blue, not black, not light blue, not green. It changes drastically according to the type of light and time of day and has appeared as many colors in my photos, just not the correct color.

John started work on the long craft tables yesterday afternoon around 5:30. Here he was building the frame.  We picked up eight 8′ 2x4s and a cheap chunk of half inch plywood. We had Home Depot cut the plywood to our specifications and John cut the 2x4s in our garage.

Within an hour he’d built the frames for both tables, attached the plywood table tops and had started attaching the legs. 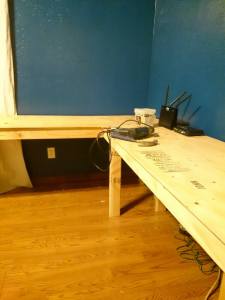 Within another hour the legs were on, the building was done and we decided the remainder of the evening would be spent watching Sherlock on Netflix.

These are going to be crafting, sewing, painting, dyeing, inking, cutting and probably spilled on tables. I didn’t want to worry about ruining a nice paint or stain job. I didn’t want to have to buy expensive wood to get a nice finish on that I would then just mess up with any of the above activities. Good old linoleum peel and stick tiles to the rescue! We found lovely slate-like tiles that combine a rich, nutty brown and dark grey blue. I had plain white satin wall paint leftover from my door painting project a couple of years ago so I used that to paint the frame and legs of the tables. John cut the tiles to fit the plywood table tops. 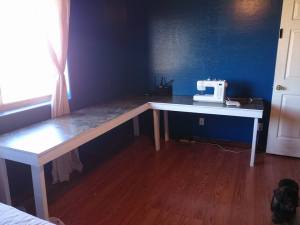 Voila! Two perfectly functional, attractive, crafting tables for less than $50.00. OH and see that sewing machine? See those curtains hanging in the window? John and I are learning to sew this year and those curtains were the first project. They’re just an inexpensive (and washable) cotton drop cloth. I’ve picked up some dye and will be dip dyeing them at some point, but they look fine just as they are for now.

I still need to add my things back, make the bed, and hang the wall mounted shelf unit. However, if a friend shows up from out of town unexpectedly I have a perfectly functional guest bedroom. Well, you know, once I make up the bed, unless they want matching pillow cases.