This may be as far as I got last year. I don’t remember and don’t intend to remember because I’d rather save the brain space for where I last left my phone.

I chose the “Stuff I use Daily” drawer in the kitchen. It has no real category other than that. It holds odds and ends that I use daily or even 2 or 3 times a week. At least, that’s what it’s supposed to hold. That’s where things like measuring spoons, whisks, bottle openers, ice cream scoop, jar openers, a butter brush, and such are supposed to go.  That’s not all that was in there.

I forgot to get a “Before” picture, but this is the big stuff that was in there. I had cleared out the ancient packets of yeast and soy sauce, the rubber bands, the loose change, and a handful of petrified jelly beans and other gleefus, and had narrowed it down to the stuff I actually use daily, weekly, a lot less than once a week, and never. 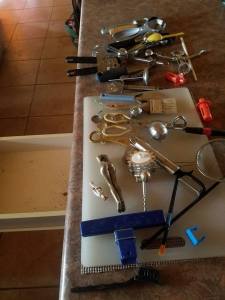 No wonder my whisks wouldn’t fit and I could never find my measuring spoons. WHO needs 4 ice cream scoops? Only 1 survived the purge. The survivor did not have a nice hand fitting handle, nor did it mechanically loosen ice cream from the scoop. No, it was old faithful. 40 year old, solid metal, no bells, no whistles, ice cream scoop. Easy to use, takes a sledge hammer to break.

Then there were these. I think we’ve used the corkscrew a half dozen times since it was given to us in 1995. I don’t think we’ve ever used the nutcracker we got at the same time. My husband’s grandmother gave them to us the first year we were together. I laugh raucously every time I see them, so they’re keepers. I just have to find another place to keep them so they can continue to appear and make me guffaw when I’m looking for something else. 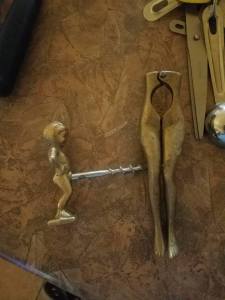