Tuesday the assignment was to clear a closet. We all saw how that turned out. Wednesday’s assignment was to work on my “project”. This was great luck because my big project is the office, which is right next to the closet I wanted to clear on Tuesday and both are related to my end game plan. I knew I could catch up. Like Bullwinkle the Moose when attempting to pull a rabbit out of his hat, I thought “This time for sure!”

“The Crew” that the air conditioning company promised to send out Wednesday morning to clean my ducts, which were threatening to kill my brand new AC unit, turned out to be one guy. One guy who apparently thought I lived in east Egypt and so decided to allow a couple of hours for a drive that only takes 35 minutes. He arrived an hour and a half ahead of time. I hadn’t even glimpsed the bottom of my first cup of coffee, much less straggled outside to feed the animals.

After rousing John and corralling the dastardly, technician eating dachshunds I let the guy in. Turns out he was a talker. This girl can’t formulate a complete sentence until an hour or so after her second cup of coffee. The dachshunds yelling their warnings at the dude, his words bouncing around in my empty head and the noise of his machine had me just about ready to launch myself to a new planet in the first 30 minutes.

That’s when it became apparent that this was not going to be a three hour job as the AC company had promised. As the clock turned the fourth hour he’d completed four vents. There are TEN in the house. I could barely get to either of two bathrooms, much less the office and closet I needed to be working on. I spent a good portion of the morning whining on facebook about this. 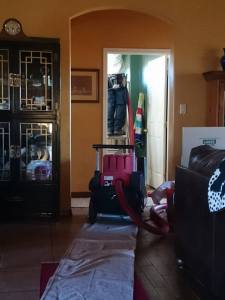 It took 8 full hours to finish the duct cleaning, plus the AC cleaning. I was feeling a bit on the miffed side, but then darned if that young man didn’t turn my lousy attitude right around. Turns out he is also a mechanic and just loves older engines. He’d seen our vintage tractor and asked about it. I told him it had worked great up until a few months ago when it decided it wouldn’t start. After he finished his AC work he asked if he could take a look at it. Sure.

He asked what it did when I tried to start it. I told him. “I bet I know the problem”, he said. He popped off the distributor cap, exposed the points and said “Yep”. With a screw driver he scraped some carbon off the points and darned if that tractor didn’t start right up! I am reunited with the most important piece of equipment on this farm all because the AC tech who enjoyed talking my ear off for 8 hours on his birthday took the time to check out my old tractor and do something nice. If I’d won the lottery last night, he and his wife would have never had to worry about paying a house note again.

Needless to say, I neither worked on the project or the closet, BUT I have a working tractor which is really much more important. In the words of Scarlett O’Hara “After all, tomorrow is another day.”