In the previous episode, the vines had taken over the entire garden, two walls of the barn and gone over three fences. Pumpkin vines, squash vines and sweet potato vines were hopelessly tangled together. Aside from the fact that this made getting around in the garden to check on the plants impossible for me, it also confused the bees who were doing their jobs collecting nectar and distributing pollen. It’s a great trade when it works. The problem here is that all squash blossoms look alike to a bee. They will merrily buzz from zucchini, to mayo arrote to pumpkin. This isn’t a problem when they buzz from zucchini to pumpkin or from the mayo arrote to the zucchini. It is apparently a problem when they buzz from pumpkin to mayo arrote.

While checking the garden one morning, I discovered several new mayo arrote squash developing on the vines climbing the stall walls. Following the vine, checking for more, I found a bright orange and green squash about the size of a baseball, hiding in the leaves. Mayo arrote squash are a very pale color with light green mottled stripes. As they mature, some of them will develop a few bright yellow streaks. None, however, are orange. There are a few types of squash which can cross pollinate. Mayo arrote and pumpkins are, apparently, two of those types of squash. We have a Squmpkin. A BIG squmpkin. It’s entertaining, but not something that needs to be repeated. When we plant next spring, we will be sure to keep the two well separated.

Because we had gone quite garden/free food crazy, we decided to start another bed in the backyard adjacent to the patio. For years there had been a large lush creosote bush in that spot. For unknown reasons, that bush suddenly died and had to be taken out. The bush had provided a good bit of shade on our west facing patio. I wanted to replace it with something that would provide shade, but couldn’t find anything suitable so the spot remained bare. As we watched the vines in the larger garden doing their best to turn the barn into a tall, green mound, we realized that a small garden in that spot could not only provide food, but if we gave vines something to climb, we’d have shade as well.

We used old pallets we’d gotten for free at a local business and slid them down over T posts for vines to climb. We added the poop trifecta in the enclosed area where we have planted large leaf and sweet basil, oregano, parsley and sage (the rosemary bush is by the front porch. Sorry, no thyme). We also added our manure mix along the outside of the pallets where we will be planting grapes next year. We’re hoping the vines will do well because those pallets are less than attractive as is. If we have no luck with grapes, we’ll just plant more squash because heaven knows those vine like crazy and will turn those ugly pallets green in no time.

Aridzona John in the Garden of Doom

Once we added the manure to the second half, the squash, pumpkin and sweet potato vines saw all that pristine earth and we’ve had the devil’s own time beating them back. We’d thought those vines would have died off by now, but it’s November and we’re still waiting.

In the second half of the garden we planted artichokes, brussels sprouts, cabbage, corn (probably a mistake but what the heck) a wide variety of lettuces, and both red and white onions. 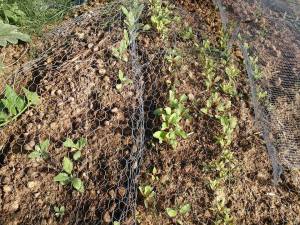 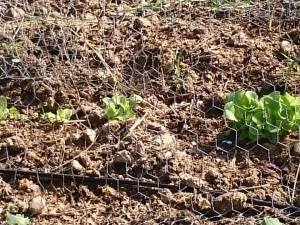 I had posted on our local small town Facebook group that I needed old chicken wire and leftover bits of hardware cloth to protect the seeds and sprouts from those birds with divining powers. We ended up with an abundance of free wire that just needed a bit of straightening to make protective tents. I noticed this morning, however, that I’m going to have to hit the plants with a bit of Neem oil as some of them are mildly bug chewed. Everything has sprouted well and looks happy, except the onions. We’ve had a very few onions sprout. However, when we were out and about last week we picked up a tray of red, white and brown onions to plant just in case. If the others sprout, terrific, there’s no such thing as too many onions in my kitchen.

Meanwhile, the squash vines are still producing and still spreading. They’ve reached the hay room fence and have also spread over the top of the south facing stall wall. There are 5 new squash on the south facing fencing alone and 4 more growing within the main garden. The squmpkin is almost completely orange now and quite a bit bigger than a basketball. Time to hunt down more squash recipes. 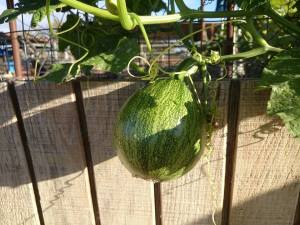