Amy (left) and Sheldon (right) inspect the jumbled pile of fascinating smells in my bathroom cabinet.

Today was the day to purge and clean out the dreaded bathroom cabinet. I had to run errands this morning. The ponies appreciate being fed and I’d already put buying pony chow off way longer than I’m comfortable with. I had to drop off a trunk load of recycling. Then, I had to make an emergency stop at Sally’s Beauty Supply. After errands I was already tired, so I really had no sense of humor left for the cabinet purge. Honestly, if I have to get down on the floor to do anything before I tile the bedroom, it’s likely not going to get done. I’m willing to throw my hip out of joint and be in bed for a week for the sake of better flooring, but not for another cabinet. Nope. No way.

Regardless of my unbending hip and back. I purged and purged more and purged still more. I found all kinds of cool stuff, not so cool stuff, and just plain stupid stuff under there. I guess I was hoping to haul out the non-working steam curler machine one day and pray/chant/sing it back into working order. Instead, I added a stop at Sally’s to my errand list this morning and pitched the useless one this afternoon. I pitched two perfectly good curling irons because if I even try to blow my hair dry from a distance it feels like straw. I will probably never need to buy more disposable razors ever because I unearthed 4 mostly full packs.

No, I did not purge the makeup yet. I haven’t bought makeup in 4 years but prior to that I invested heavily. I tried. I really did. All I could see was BIG BUCKS AT ULTA going into that garbage bag and I just couldn’t do it. Even though my face has sagged, bagged and wrinkled to the point of making wearing makeup ridiculous, I just couldn’t do it.

The other thing I didn’t do, again, was read ahead on the schedule to see that this project was coming up. If I had, I’d have gone out and found inexpensive baskets to better organize what didn’t get pitched.

All I could do was semi-organize. Moisturizers, makeup (cough) and other things that swore they’d defy my early aging (I didn’t purge those either. Hope springs eternal) behind one door. My new steam curler set behind the middle door. Shampoos, conditioners, soaps, hand sanitizers and mouthwash behind door number three. I moved all but a couple of cleaners to the newly organized crates in the laundry room.

After the cabinet purge. I swear to you I purged. It will look better with baskets. Really. 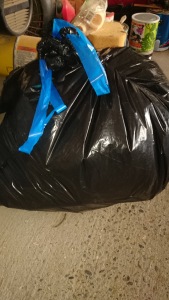 I told you I purged. That’s a lawn and leaf bag three quarters full and almost too heavy for me to lift.

There were mostly empty cleaner bottles, empty cleaner bottles, moisturizers that no longer pumped they were so old, conditioners that only left my hair limp, stuff in generic travel bottles I could not identify. Old medications, medical supplies, nose hair trimmer, a non-working electric shaver, battery power toothbrushes, and an inordinate number of mostly used up Magic Erasers. In spite of the after picture still looking cluttered, I can actually see what I have in there now. The baskets to organize will make it much better. Seriously.

I also need to Google and YouTube my little aged heart out to see what makeup and shampoos will work for me now. If I find something that works, I’ll be willing to pry the stuff from Ulta and Bare Minerals out of my clenched fists. But not a ruddy moment before.