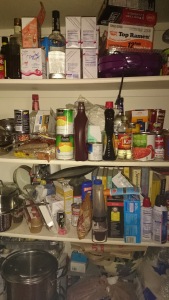 Obviously, I’ll still be fighting the floors throughout the “Cure”, but our assignments for Monday, Tuesday and today are things I can do. Create an “Outbox”, make a list of problem areas, and organize the pantry.

Outbox? Not a problem. DONE! It used to be called the office. Over the course of the past year, however, it’s been the catch all for things I didn’t know what to do with or how to do away with yet, boxes filled with models, boxes filled with books, old craft supplies I’ll never get to, old VHS tapes, and everything else I’ve dug out of corners, closets and other rooms that need to go just about anywhere else other than here. I laugh at the thought of an “Out box” or bag to contain over 20 years of clutter accumulated both before and after William.

Uncovering the clutter in this house has been akin cutting the strings on a new bale of hay. It wasn’t in the way, we didn’t feel like hoarders, but cut the “strings” and POOF the clutter bale springs outward, becoming twice the size it was when it was neatly stacked away in closets. It needs an Out Room, possibly two, to contain it.

The list was simple. I’m grand at making lists. William was grand at making lists. I’m not great at checking things off unless it’s a grocery list. William’s hale and hearty to-do list speaks for itself. To be fair, the items on his list are more difficult, manly man to-do items. I’ve lived in this house for almost 10 years. I know where the problem areas lie. I know what things bug me and need to be changed. Making the list was easy. Paring the list down to those items which will make the biggest difference was even easy. Getting them all accomplished in January, impossible. Still, there are many smaller tasks that, once accomplished, will make those larger problems much easier to handle.

Today is Pantry Purge day. I do this every year anyway and it was one of the items on the above list I prepared yesterday. So, I get to check off an item on my Cure to-do list as well as complete my today’s assignment. However, anyone thinking this is an hour to hour and a half job, hasn’t seen my pantry. How the heck can that thing junk up so fast in 12 months?! I’m the world’s crappiest house keeper as well as the most disorganized. Perhaps I should make a resolution to buy only two weeks worth of canned goods, one box of cake mix per month, only enough broth to get through two weeks, etc. If I plan my meals better, I can plan my pantry better by only keeping in the pantry what is actually going to be eaten within two weeks and get NOTHING ELSE until the pantry is empty. My problem is, that what sounds good today when making meal plans, will probably seem like too much trouble and mess for just me or I won’t be in the mood for it when time comes to use it. There’s an answer to this. I just haven’t found it yet. I will.