First I’ll show this picture of the bed and then I’ll tell you why this is not the hanging patio bed we originally planned. We will be putting the arms on this week and painting it when the winds die down.

When we started this project, we had seen several articles about hanging patio beds, how to build them and even people selling them. Looking at the beds themselves, we knew this would be a big project and we’d have to figure out how to do many things, but we really wanted to give it a go. We had all the items we needed to build the bed from the freebie pallets to the Craig’s List wood pile and all we’d need to purchase would be the hardware. We thought. Remember in the blog post “Surprise Project 2: The Surprise is On Us” I mentioned not putting off something you know is going to be a problem later? Yeah, well, here is a picture of the problem we put off until after we put the 150 lb bed together.

I saw this problem before we began and after seeing all of those handy dandy videos and tutorials, including one from Home Depot, I thought we could figure out a way to deal with it later. The problem is that those are simple 2 x 6s attached to the house with joist hangers. The outer edge of the patio is supported by 4 x 10 beams supported by large log columns. I knew we’d need to figure out a way to bolster the support system of the 2 x 6s but didn’t know how to add support to where the beams join the house. Turns out we couldn’t. After speaking with the very helpful and informative manager of the lumber department at our local Home Depot, we learned that our 6 to 12 pack a day builder had built our patio roof as if it were a simple addition and not the new construction that it was. He told us that most homes under construction have the patio roof firmly attached to the frame of the home and roof. Our guy, slapping up houses cheap and fast during the real estate boom of ’05, did not. Those beams you see up there are attached to nothing more than the fascia. The bed alone might have pulled the fascia down and putting people on the bed would have been calamity.

We considered plan B, which was to hang the bed in a two point system from the large, well supported beam at the outer edge of the patio seen below.  Our patio faces west. This is Arizona. During our 4 month season from hell, the patio can reach 130 degrees by the time the full sun hits it in the afternoons. So right from the get go I didn’t want to hang the bed right where the sun would hit it for 6 to 8 hours. I also didn’t feel the two point system attached to the main beam would allow it to swing in a stable manner. It seemed to me that this would cause a hammock effect and I didn’t want to get dumped onto the patio. Thirdly, our patio has three access points to the pool and back yard. The only way to hang the bed on that one beam would have blocked one of those access points. 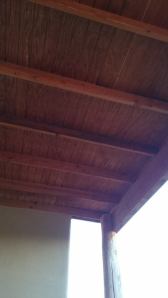 This left us with Plan C., which was to build a very sturdy frame that would stand up to the swinging motion of the bed in four directions as well as 600-700 lbs of weight. Back to Home Depot we went, I’ve been there so many times per week now that even when I don’t need to go my truck has bypassed the grocery that was my intended target and wound up in the Home Depot parking lot. We waited to speak to the chief wood guru who was nice enough to help me decide which wood and size that would handle our load bearing issues. I cannot stress enough that newbies to DIY, like us, take the time to wait and ask the head honchos in each department for their advice. The two top guys in the lumber area at our local Home Depot have been invaluable. You may have to actually corner these guys because they are always busy, and you may have to use a little patience and tact if they hit you with a statement like “Unless I came to your house and looked I can’t tell you what would work…” or something to that effect. Simply ask something like “How can I describe this to help you visualize the problem”, be ready to draw pictures or even better, have photos on your cell phone handy to show, because we all know they are not coming to your house to look at the problem.

For the frame, we chose two 10 ft. 4 x 6 fir beams, one 8 ft. 2 x 6 fir beam, and four 8 ft 4 x 6s for the posts. We used 8 inch carriage bolts to attach the long beams to the posts, and four 3 inch screws to attach the 2 x 6s to the posts on each end of the frame. The 2 x 6s are non-weight bearing and are just there to provide the necessary stability for the back and forth motion of someone on the swing. We used four heavy duty 8″ eye bolts on the long beams and four heavy duty 6″ eye bolts on the bed frame. We set the posts so that there would be about 8 inches of swing room side to side to accomodate random jostling, and about the same back to front to quell the urge for excessive swinging. The bed still swings aplenty back to front, but we didn’t want anyone going crazy with it.

When setting the posts, we leveled each one every step of the way and leveled each long beam and side support. The 8′ posts are sunk 2 feet into the ground in cement, bringing the height of the frame to six feet tall. As there isn’t enough room to walk under the frame, due to the size of the bed, we felt this was sufficient because anyone taller than six feet would be in the process of sitting, seated, or snoozing and wouldn’t bonk their head. Our excessive leveling process really paid off because the bed swings true. We hung the bed two feet from the ground and used four feet of heavy duty chain on each corner.

We still need to add the arms and back and hope to incorporate some of the natural mesquite branch trimmings. I have a mattress topper on order and will be painting the bed and frame, but it’s already quite a lovely addition to the back yard and it’s been a real temptation to nap already.

Update: Finally got the mattress and linens for the bed. Here’s how it looks all dressed up!

Of course, it’s the end of May and it’s 95 degrees in the shade at 10:00am, but I’ll be able to cozy up and enjoy it this evening, or maybe ’round midnight, for a week or two until it’s 95 degrees at midnight. This fall it will be glorious though!